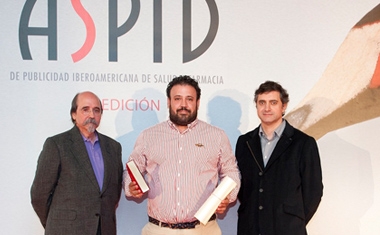 The communication agency specializing in health innuo has been awarded gold and silver in the sixteenth edition of the Aspids, the prizes for Latin American Health and Pharmacy Advertising, held in Madrid last Thursday.

The Golden Aspid went for Unilever’s internal marketing campaign “BRAC Ambassadors”,  which aimed to mobilize the internal target from the most emotional aspect to the most practical. The action sought to promote the involvement and commitment of the internal target in the first person by naming them BRAC Project Ambassadors. The aim is to help 250 women in Satkhira, one of the poorest areas of Bangladesh, out of extreme poverty. When the campaign ended, they had managed to sponsor a total of 270 women and had raised € 107,985.  100% of Unilever’s departments participated.

“This project was possible thanks to the spirit of solidarity of our employees, their families, suppliers and customers who have made a measurable difference, besides creating hope in people who are so much in need”, says Ana Palencia, Director of Communications at Unilever Spain .

The Silver Aspid went to the online communication strategy developed for VITIS Hygienists. A common field of action between Vitis and the hygienists was defined to offer added value to the brand and to obtain mutual benefits through engagement. As a result of synergy between on-site and online activities,  1 in 3 hygienists are now fans of VITIS Hygienists Facebook page.

During this edition of the Aspid Awards, considered a reference within the health sector, innuo was the independent agency that won the most prizes, occupying fourth position in the list of winners, out of a total of 19 agencies that submitted 164 works.

“For innuo, being a prizewinner in two strategy categories for our industry peers is a great reward for the efforts made so far in these two areas.” “These two campaigns are the fruit of our partnership with Unilever and Dentaid, which allows us to open up co-working possibilities from the beginning as equals, and to work towards a common goal”, said Xavier Lorenz, Managing Director of innuo.

Since its founding in 2002, innuo has received a total of 12 awards in this competition.

About innuo
Innuo is an independent communication agency specialized in healthcare and founded in Barcelona in 2002. The innuo team is made up of multidisciplinary professionals who develop communication projects based on the management of scientific evidence and the application of new technologies for brands and clients both nationally and internationally.