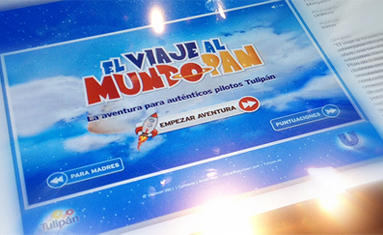 Barcelona, 29 March 2012: innuo received a Best Pack prize for “El Viage al Mundo Pan” (“The voyage to the world of bread”), an advergame for children aged six and over associated to the margarine brand Tulipan. Its objective is both recreational and educational and it forms part of a broader campaign strategy, The Tulipan Plan, which includes various family orientated tactics linked to tea time.

“We created this interactive game, a mixture between a graphic adventure and a series of minigames, with the objective of tapping into children’s natural curiosity and sense of competition” stated Sergio Oca, innuo Executive Creative Director

“We take great pride in this award as it recognizes innuo’s creativity applied to online interaction between brands and consumers by combining games and education.”

About innuo
Innuo is an independent communication agency specialized in healthcare and founded in Barcelona in 2002. The innuo team is made up of multidisciplinary professionals that develop communication projects based on the management of scientific evidence and the application of new technologies for brands and clients both nationally and internationally.